Airlines increase flights into Aspen for summer and fall 2017

There will be new and expanded nonstop flights into the Aspen Airport (ASE) this summer and fall, officials announced recently. The expansion includes the return of the Delta flights from Salt Lake City and Los Angeles, marking the first time the airline has flown into Aspen Snowmass during the summer months in nearly a decade. 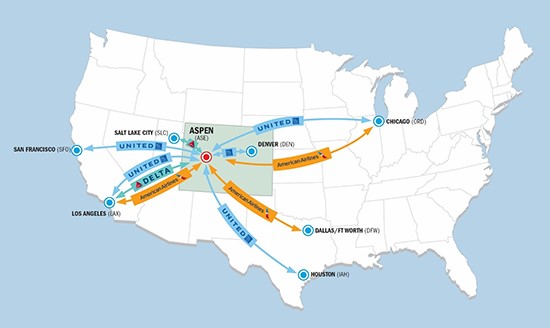 All three airlines - American, Delta and United - expanded
their nonstop flights into Aspen farther into the summer and fall.

The move creates convenient one-stop connections from most points of origin for summer travellers to Aspen Snowmass. All flights operated by Delta will be using 70-seat CRJ-700 jets.

In addition, United and American will be extending nonstop flights farther into the summer and fall months, with nonstop summer flights from Chicago (ORD), Houston (IAH), Los Angeles (LAX) and San Francisco (SFO) all scheduled through Sept. 4. United service from Chicago (ORD) will operate daily through Oct. 27. United also will continue its daily flights from Denver (DIA), with as many as eight flights daily during the summer and fall seasons.

It's the first time since 2008 that all three airlines have served Aspen Snowmass during the summer months and the first time ever that nonstop flights will be offered from seven different cities, according to officials.

Remember, all Frias Properties guests receive complimentary Aspen Airport transportation to and from their lodging accommodations. (Excludes Independence Square hotel.) The Aspen Airport is conveniently located three miles outside of Aspen. It is a short flight from Denver, typically less than 35 minutes, weather permitting. Once you book your stay with Frias Properties, you will receive a confirmation letter via email with instructions on how to schedule your airport transportation. It's easy! Begin your lodging search or learn more about transportation.